Charles Durand is a French guy, who immigrated to Montréal about a year and a half ago to study to become a chef. Although Montreal is known for its fine dining, Marko Lebeau found it ironic that someone from France, the world’s culinary capital, would cross the Atlantic to study haute cuisine! Maybe it was the attraction to poutine and burgers, the guys joked, that drew this 22 year old, dark eyed and sensual bi Scorpio to migrate to Montreal. Taking in a mild February day, Marko and Charles decided to take a jog in the City’s central Mount Royal Park, overlooking the city core and the outlying areas beyond. Taking a break in their run, Marko interviewed Charles at the top of the Mountain. The contrast in these guys’ accents was cute. French and Québécois accents are about as different as that of English spoken in Britain versus the US. After their jog, Charles was to perform a solo, but once again Marko wanted to offer his new friend a helping hand, so to speak…After showering, Charles entered the massage room where he was going to perform his solo only to find Marko ready to offer his assistance. An invitation that Charles accepted with a smile. So, Marko didn’t lose any time working his hands and mouth down on Charles ripped chest, cut abs and 7” uncut cock. Charles and his dick appeared to enjoy the attention. Then, he wasn’t at all shy about offering up his asshole to Marko’s good spitting and tongue thrashing. Marko was skillful at keeping Charles dick hard throughout. But being the perfect gentleman, thought it best to let Charles take himself over the top seeing as this was his first gay porn experience. Once Marko made his exit, Charles took over working his own cock and only took moments to ramp up and deliver a hefty load of cum for his newfound friends at Men of Montréal. 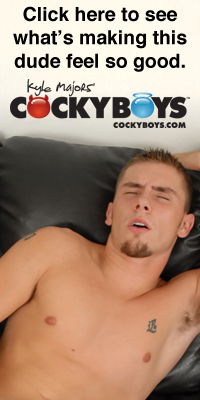