I half-jokingly said this writeup could consist of simply, “You’re welcome.”

All kidding aside, this is one of the videos people have truly been clamoring for – to see Connor get double-penetrated. You know Connor – it’s go big or go home with him, so he had to make sure he could take two of the biggest dicks we had – Chandler and Trey!

It’s not just dick size that make Chandler, Trey and Connor so popular (or even their incredible looks or ripped bodies). All three guys have one thing in common – a passion for sex.

That sounds a little redundant, but these three don’t just like to get off, they like to enjoy the moment. Every touch, every kiss, every animal-like noise and each power thrust – these are some of the hottest guys around, but their enthusiasm makes them even hotter.

Every time we see Trey, he brings something new to the table. He’s so in tune with what he likes sexually, it makes filming him a joy. Chandler keeps surprising me with his raw eagerness to fuck and get fucked. And Connor could make fucking a hole in the wall sensuous.

It’s an awesome video, with all three guys aggressively trying to please each other and push the envelope for Connor. It’s incredible to watch his face when he has both huge dicks inside him. Whew!

Of course, there’s too much dick in the room for power bottom Trey not to get some! Connor and Chandler both take turns fucking him. The sizzling action winds up with both Trey and Chandler taking a load in their mouth.

We didn’t plan for this to be the Thanksgiving update, but when it ended up on the schedule that way, it made me think about how thankful I am – that we have such an amazing group of hot guys that put it out there for all of us to see and enjoy.

I’m thankful for these three guys in particular for having such great chemistry and high energy. They had a hot time sucking, fucking and double fucking, and it’s a video I’m extremely proud of.

I’m also most thankful for our fans – thanks to all of you for all of your support! Now sit back, let your turkey settle and enjoy the best stuffing you’ll get this year! 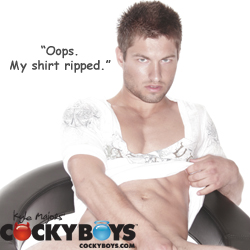